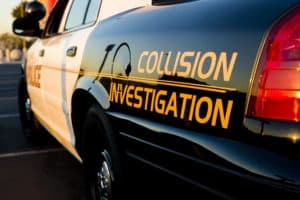 CENTRALIA, WA (September 10, 2018) – A DUI motorist was arrested Monday afternoon following a hit-and-run crash on Tower Avenue. The suspect was only identified as a 53-year-old woman from Vancouver.

According to the Washington Highway Patrol, the collision took place at approximately 3:40 PM near 6th Street. The report showed that the woman, driving a silver Ford Focus, had T-boned a semi-truck and driven away from the scene by the time officers arrived at the scene.

A few minutes later, police spotted the car heading south on South Gold Street. Officers turned on their lights and sirens in an attempt to pull over the woman, but she kept driving, initiating a police chase.

Spike strips were deployed, flattening three of the car’s tires, but the woman kept driving as police continued to chase her. Officers attempted several times to stop the car using PIT maneuvers, but the driver managed to keep going each time. They finally stopped the car at the intersection of South Gold Street and Summa Street.

The woman was still uncooperative, and officers had to pull her from the driver’s seat of her vehicle. Police said she appeared to be under influence of drugs or alcohol, and was taken into custody and booked into jail for investigation of hit-and-run, DUI, and attempting to elude law enforcement officers. Three patrol cars were damaged during the pursuit and multiple attempted PIT maneuvers. No additional information has been released to the public, as the investigation is ongoing at this time.

Never get behind the wheel if you find yourself under the influence of drugs or alcohol. By being responsible, you can ensure your safety and the safety of surrounding vehicles, motorists, and pedestrians.

If you or a loved one’s safety was put in danger on the road due to a driver under the influence, contact the experienced auto accident lawyers at Sweet Law Group. We have over 40 years of experience in the field, and know what it takes to win your case and achieve the justice and compensation that you deserve. Call us day or night, at (800) 203-3061 for a free case evaluation by a legal professional in your area. You can also reach us 24 hours a day/ 7 days a week by online chat, text message, and email.