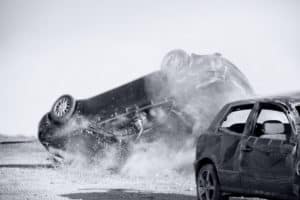 The rollover accident happened around 10:30 a.m.

According to the California Highway Patrol, the incident took place in the westbound lanes and ended in the eastbound side. The driver of a white pickup truck reportedly struck a black truck after weaving in and out of traffic. Reports say the white truck was speeding prior to the accident.

When the white pickup truck driver tried cutting into the No. 1 lane, that was when both vehicles collided. Subsequently, the white truck flipped over the cement divider and landed on the eastbound side.

Unfortunately, that driver died at the scene; officers say he was not wearing a seatbelt.

In light of this tragic news, our law firm would like to send our sincere heartfelt sympathies to the friends and family of the victim.

When deciding on a personal injury lawyer for your case, consider a law firm that’s been around for years. The Sweet Lawyers merit your consideration. We’ve worked with thousands of families and have helped them acquire justice and financial assistance in covering medical costs and memorial bills. If you’re interested in our legal efforts and would like to hold the reckless driver accountable for his or her actions, call (800) 674 7852.