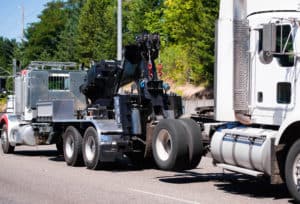 1 Dead and 3 Hurt in Salkum Crash on Highway 12

SALKUM, WA (August 6, 2020) – Monday morning, a driver died and three others sustained injuries in a tow truck accident on Highway 12.

According to reports, at 1:44 a.m., a tow truck driver and two passengers headed west on Highway 12, near Stowell Road near milepost 78. However, an oncoming semi-truck hit the tow truck as it tried to make a u-turn.

“Both vehicles were traveling westbound prior to the collision,” Trooper Dakota Russell said. “The tow truck … did not see the semi-truck behind them thus causing a T-bone collision.”

At this time, the WSP didn’t provide the identity of the deceased driver from Cle Elum. However, they confirmed that the cause of the collision was an “unsafe U-turn.”

At this time, it’s still unclear whether drugs or alcohol caused the crash.

Meanwhile, eyewitness Jodi Hornby said, “At 1:40 a.m., Jon and I jumped out of bed because we thought we heard a plane crash. I ran outside, saw corn and glass all over the road, heard a neighbor say, ‘We need help out here!’ and called Lewis County Dispatch.”

“She was sleeping in the passenger seat of the car being towed,” Hornby revealed, talking about one of the passengers. “Miraculously, the car came off the trailer and landed perfectly upright, right next to the flatbed.”

We understand that losing a loved one is never easy. Our law firm would like to express our heartfelt sympathies to those mourning the loss of the victim.

In the case of the tow truck accident on Highway 12, the family of the victim must become aware of their rights under the law.