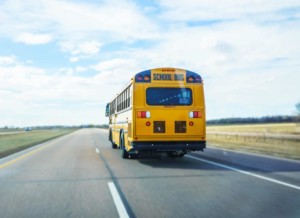 According to the Clark County Sheriff’s Department the crash happened around 7:30 AM near Laurin Road. As stated in reports, a school bus and a vehicle were involved in the collision. As a result, it sent the bus into a nearby field. However, the cause of the accident is currently unknown.

First responders arrived shortly after the accident. Roughly twenty students were on the bus at the time of the collision. Fortunately, no one on the bus was injured. However, the driver of the other car involved in the crash suffered a minor injury. His current medical condition is unclear at this time.

The students on-board were transferred to another bus and taken into their designated school.

The surrounding area was closed off for a brief time for cleanup and preliminary investigation, but has since reopened. No further details have been released regarding the circumstances leading up to the incident at this time.

When you are driving next to or near a school bus, keep your distance as they have larger blind spots and less visibility than smaller vehicles. In addition, be mindful of your bus height and weight when gaining speed or making turns. Always scan your surroundings for other vehicles to prevent yourself and others from being involved in an accident.

If you or someone you love was involved in an accident, contact Sweet Lawyers at (800) 674-7854. With over 40 years of experience in the legal field, we know what it takes to win your personal injury case. Let us help you achieve the justice and compensation that you deserve. Contact us today and arrange a free, no-obligation consultation at a location near you.