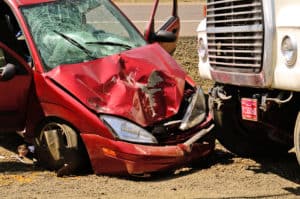 LAS VEGAS, NV (February 13, 2020)— Paramedics brought one driver to a hospital following a semi-truck crash on Las Vegas Boulevard North near the 15 Freeway on Tuesday morning.

According to Las Vegas Metropolitan Police, the accident happened around 6 a.m. near the Apex industrial site.

It appears the firefighters who arrived on the scene extricated the person from inside the four-door sedan. Afterwards, emergency personnel transported the patient to the hospital. It was namely the sedan that suffered damage from the collision.

Later, deputies confirmed the accident involved solely a sedan and semi-truck, both crashing under unknown circumstances.

Police do not suspect alcohol or drugs to have had played a role in the accident; however, an investigation concerning the cause remains. The surrounding area on Las Vegas Boulevard was closed down for a brief time.

Navigating around larger vehicles, namely RVs or semi-trucks, can be tricky if we fail to approach them with caution. Slow down and take your time when you’re in doubt. The faster we travel, the less time and road space we have to react accordingly.

The financial pressures from a car accident can slow an individual down. If you’re struggling to cover hospital bills while trying to recover, seek trusted personal injury legal support. The Sweet Lawyers are your legal resource for obtaining justice and compensation. We strive to get our clients the outcome that will bode well for their recovery and future. If interested, please call us at (800) 674 7852.