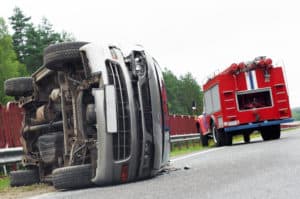 According to the California Highway Patrol, the incident happened around 6:25 p.m.

Per witnesses, a black Toyota 4-Runner driver suddenly made a sudden left turn after traveling north. However, as he turned, his SUV collided with a southbound vehicle, causing his 4Runner to overturn several times and eject him.

As a result of the accident, the Toyota came to a stop on the far-right lane of the southbound side, while crews found him outside of the vehicle.

At least one EMT and multiple witnesses stopped to assist the driver, who reportedly sustained major injuries. The victim, whose identity has yet to released, sought treatment at Sierra Vista Regional Medical Center.

As of now, reports haven’t included any information regarding the other driver.

Road accidents happen every day and if we want to avoid the dangers of being involved in one, we should remember to exercise safe driving practices. Travel at a controlled speed limit, tackle turns and lane changes with ease and adhere to traffic lights and road signs. Reckless driving happens when we’re distracted, unaware or irresponsible.

You can trust the Sweet Lawyers to represent your personal injury case. Our lawyers are thoroughly trained to handle a hodgepodge of specialties, ranging from disability to wrongful death. Over the years, we’ve met many families in need of legal assistance. Whether you’re facing financial hardship or a loss in the family, we’re here to help you move forward. Call (800) 674 7852 to hear from us.