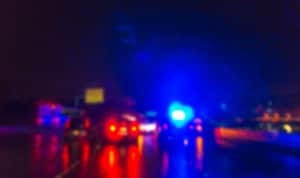 According to the California Highway Patrol, the accident befell at 12:40 a.m.

CHP officers say three cars initially crashed on the northbound highway. Subsequently, a charter bus driver who’d been traveling behind the vehicles failed to stop in time and crashed into the line of cars.

As a result of the accident, the bus became submerged in flames.

Eighteen bus passengers, as well as the driver, were able to escape the fire.

However, a driver in a Lincoln Navigator, only described as a male in his 40s, died after rear-ending the bus.

The incident left two bus occupants and another driver with injuries. Paramedics ushered all three to San Francisco General Hospital, yet their injuries remain unknown.

It appears the bus, operated by Peninsula Tour of San Francisco, had just picked up the choir from San Francisco International Airport. The members of the Aeolians Choir of Oakwood University in Huntsville, Ala., were on their way to a hotel when the crash unfolded.

Authorities are sifting through evidence in determining the ultimate cause and where the fault lies.

We’d like to take this moment to express our sympathies to the family and friends mourning the loss of their loved one.

The Sweet Law Group has instilled into its firm a tradition of excellence. When choosing a personal injury lawyer to fight for you, hire us. We know a family death can leave anyone involved subdued. Yet with our legal representation and guidance, you can relax and recover while we take care of everything else. We strive to deliver the touchstone of legal support. To schedule a free consultation, call (800) 674 7852.