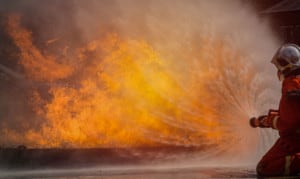 According to police reports, the fiery crash was between two big-rigs and a pickup-truck. The incident reportedly shut down a stretch of the freeway for several hours. California Patrol Highway first received reports of the fiery crash around 1:50 a.m., near Burbank Boulevard.

As a result, the Burbank firefighters were called to the scene to put out the fire. Authorities later revealed that the crash did not lead to any injury.

However, the collision caused the axles to break off one of the big rigs.

Due to the crash, the authorities diverted the traffic off the northbound 5 Freeway at Empire Avenue. By 7:00 a.m., the No. 1 and 2 lanes reopened while the No. 3 and 4 remained unavailable. The Scott Road offramp was also closed.

Driving a car may seem like a commonplace event, but it is one of the most dangerous things you will ever do. It’s always best to focus on the task at hand. Put all distractions away, be careful around other travelers. By doing so, you can minimize the risks of car accidents.

Distinguished personal injury assistance and guidance can be found with the Sweet Lawyers. Since the dawn of our firm over 40 years ago, we’ve assisted families in need of legal care. From car accidents to wrongful death, we’ve settled a myriad of lawsuits that have helped many people. If you refuse to settle and would like to take legal action against the reckless driver, call (800) 674 7852. In addition, we can also be contacted 24 hours a day and 7 days a week by email, online chat, and text message.