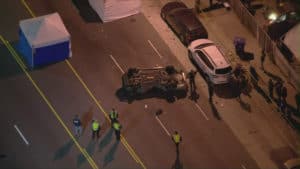 Las Vegas, NV (September 18, 2020) – Authorities identified David Matthew Montalvo as the victim who jumped out of a car on Russell Road and Buffalo Drive.

At 12:28 a.m., authorities first received reports of an injured man on the road near Russell Road and Buffalo Drive intersection.

David Matthew Montalvo, 34, a passenger of a 2017 Toyota Tacoma, reportedly jumped out while the car was moving. The vehicle was traveling eastbound on Russell Road when Montalvo opened the door and exited the car.

Medical personnel took him to University Medical Center; however, he later died due to the blunt trauma sustained.

Meanwhile, the driver and another passenger of the Toyota stayed at the scene for the investigation. However, the driver failed a field sobriety test, and authorities then arrested him for driving under the influence.

According to a report, David Montalvo’s death was the 69th road accident fatality in the LVMPD’s jurisdiction this year.

Our thoughts are with the family and friends of David Matthew Montalvo. We at Sweet Lawyers wish them strength and comfort during this difficult time.

If your family is suffering from an unexpected death road due to a negligent or an irresponsible driver, contact Sweet Lawyers. We have over 40 years of experience in the legal field, and we will fight to achieve the justice and compensation that you and your family deserve. Our attorneys and experienced professional legal team have dealt with many tricky cases on wrongful death. Call our offices today at (800) 203-3061 for a free and confidential consultation. For your convenience, you can contact us 24/7 by email, online chat, and text message.