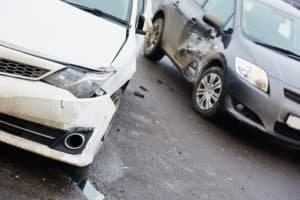 The driver piloting the Chevrolet, who was said to be a 17-year-old boy from Oakland, failed to comply with authorities, leading them on a pursuit. Per the CHP, the Chevrolet headed southbound on Quail Lakes Drive where it blew through a red light and plowed into three vehicles.

A gray Chrysler Sebring, a Toyota Matrix and a black Chrysler Town and Country were involved in the crash.

Christian Harrison was the 35-year-old driver of the Chrysler Sebring who died at the scene. Francis Kim, 32, who was driving the Toyota Matrix and Kareem Sukwa, 43, who was operating the Chrysler Town and Country suffered minor and major injuries.

The unidentified teen sustained major injuries and was brought to an area hospital where he remains in custody. During its preliminary investigation, officers determined that the Chevrolet Silverado was stolen from a Stockton resident but had not been reported at the time.

Details regarding at what speed the truck was traveling is under investigation.

We would like to send our sincere thoughts and sympathies to the bereaved family and friends of Christian Harrison.

There’s still time to file a wrongful death claim against the reckless driver. At the Sweet Law Group, we have cultivated our positive reputation over the years by fighting diligently for our clients, winning each case and remaining compassionate and professional. It’s never easy dealing with a loss, especially one caused by a negligent motorist. Whether you’re financially crippled or are in grief and distress, acquire second-to-none representation by partnering with us. Call (800) 203-3061 for a free consultation.