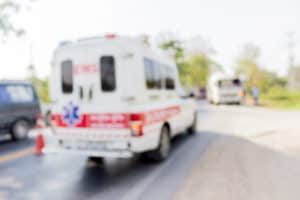 One Dead and Four Injured in Ambulance Accident at Lewelling Boulevard

SAN LORENZO, CA (May 7, 2018) – An accident between an ambulance and a sedan in the East Bay, left one person dead and four others injured, late Monday morning. The deceased victim was identified by the Alameda County Coroner as 74-year-old Catherine Sunday.

According to the California Highway Patrol, the collision took place around 11:00 AM at the intersection of Hesperian and Lewelling Boulevards. The Paramedics Plus Ambulance was traveling south on Hesperian on route to the hospital with sirens and lights on, with Sunday in the back.

A white Audi heading eastbound on Lewelling crashed into the side of the ambulance in the intersection, tipping it over on its side. All five people sustained injuries and were taken to the Eden Medical Center in Castro Valley: two paramedics, one firefighter, the Audi driver, and Sunday.

Sunday succumbed to her injuries and was pronounced dead by medical professionals. It is unclear if she died from her condition before the crash, or injuries sustained in the accident. The Audi driver suffered moderate to major injuries, while the injuries of the other people were not disclosed. They were all treated and released from the hospital.

The investigation was taken over by the Multidisciplinary Accident Investigation Team (MAIT). If you witnessed the fatal accident or have additional information to share with the authorities, contact the CHP at (510) 581-9028.

Heartfelt condolences to the family and friends of Catherine Sunday. May she rest in peace.

If you have lost a loved one, or have been injured in a car accident caused by the reckless and inattentive driving of another person, contact the wrongful death or personal injury lawyers at Sweet Law Group. With over 40 years of experience in the field, our attorneys and professional legal team have the experience and resources to win your case. We promise to fight for you until we achieve the justice and compensation you deserve. Call now at (800) 203-3061 for a free initial consultation at a location near you.