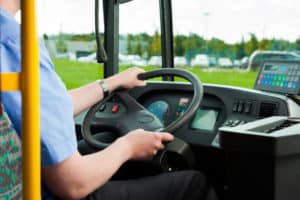 VICTORVILLE, CA (April 5, 2019) – Multiple passengers suffered injuries following a bus accident on Palmdale Road. Their identities have not been released.

Authoritites received reports of the collision at approximately 2:30 p.m. First responders arrived to the area near Borego Road shortly after.

According to deputies, a silver 2015 Nissan Sentra plowed into the rear of the parked bus on the south side of Palmdale Road. Following the accident, the driver of the sedan informed authorities that he had just wrapped up a shift and was tired.

Paramedics were immediately dispatched due to needed medical assistance. Several bus passengers sought treatment at nearby hospitals, according to reports. Multiple serious injuries were reported as a result of the impact.

The crash scene was closed for a brief time while crews worked to clean and finalize preliminary investigation. Surrounding roadways eventually reopened. No further information has been given at this time.

Operating a vehicle when you’re exhausted is extremely dangerous. Similarly to being impaired, we are far less alert and aware of our surroundings. If you find yourself unable to drive, find another safe way to get to your destination.

If you are rehabilitating from an injury due to a reckless road collision, hire the Sweet Law Group to represent your case. We have the best resources on hand and the wisdom and experience you need in a litigator. Call (800) 674 7852 to schedule your free consultation.