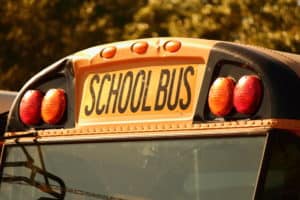 HESPERIA, CA (April 10, 2019) – Wednesday afternoon, an unidentified 10-year-old boy was struck by a school bus while riding his bicycle on Peach Street.

Officials reported the accident occurred around 2:44 PM near the intersection of Fairburn Street and Peach Avenue.

California Highway Patrol Officer Osegueda stated that bus was traveling northbound on Peach Avenue. The boy was riding his bicycle eastbound on Fairburn Street. Soon after, he failed to stop at the stop sign. As a result, he collided with the bus.

First responders arrived and the boy was airlifted to Loma Linda University Medical Center. In addition, he reportedly sustained multiple fractures and lacerations to his face. However, there have been no updates in his current medical condition.

No students on the bus were injured. School officials requested another bus to transport the thirty-seven children onboard.

No additional information has been released. However an investigation continues into the cause of the accident. Anyone with information is encouraged to call the Victorville California Highway Patrol at (760) 241-1186.

All cyclists should wear a helmet and protective gear when riding. Always check for traffic and proceed when safe to do so. Motorists should also scan their surroundings for other motorists and cyclists. As a result, you can prevent avoidable accidents.

If you or someone you know have been involved or injured in a bicycle accident, call the attorneys at Sweet Law Group (800) 674-7852. With over 40 years of experience in the legal field, we have a team and the resources to win your personal injury case. Let us help you achieve the justice and compensation that you deserve. Contact us today for a free over the phone consultation to answer any questions or concerns you may have at a location near you. We can also be contacted by email, online chat, and text message 24 hours a day/ 7 days a week.