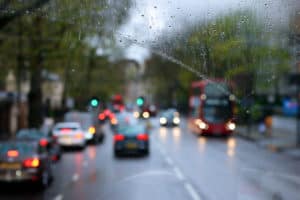 VANCOUVER, WA (April 7, 2018) – Six people were injured in a multiple-vehicle crash on the 5 Freeway on the Interstate Bridge, early Saturday afternoon.

The incident occurred around 12:19 PM. Authorities reported that a green 2001 Chevrolet Silverado pickup, a red 2003 Toyota Highlander SUV and a silver 2009 BMW 328 4-Door were all traveling southbound on Interstate 5 when involved in an accident.

A fourth vehicle, a silver 2009 Ford Focus 4-door was stopped in the left lane after being involved in a minor collision before the series of crashes occurred. The Toyota and the BMW slowed down for traffic ahead when the Chevy pickup crashed into the rear end of the Toyota. As an effect, it was pushed into the BMW, which then was pushed into the Ford.

Five people were listed as injured, but not brought to a hospital: 56-year-old Suni L Kumar of Hillsboro, the driver of the Toyota; 54-year-old Margaret McLaughlin of Port Orchard, the driver of the BMW 328; 41-year-old Amy L Jouwsma of Woodland, the driver if the Ford; 65-year-old Rajendra Prasad and Munita B Prasad, both passengers in the Highlander.

72-year-old Bodhmati Oliver of Tacoma, a passenger in the Highlander, was injured and transported to the Emanuel Hospital for treatment and evaluation.

Authorities said that the cause of the collision was inattention of the green Chevrolet Silverado pickup’s driver, 62-year-ld Candy Kennedy of Sedro Woolley. He was not injured in the accident, and was cited for following too closely.

Driving on the highway at high speeds requires the driver’s full attention. One small mistake could lead to disastrous results and may end up hurting the driver or others on the road. Always drive defensively and stay alert to prevent any tragic accidents that may put yourself and other motorists, pedestrians and cyclists around you in danger.

If you or a loved one was injured on the road due to a negligent or irresponsible driver, contact the personal injury lawyers at Sweet Law Group. We have over 40 years of experience in the field, and know what it takes to win your case and achieve the justice and compensation that you deserve. Call (800) 203-3061 and arrange a free initial meeting with an experienced legal professional in your area.