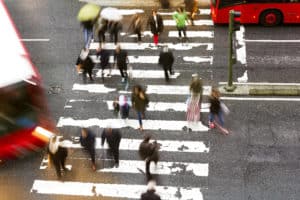 Female Pedestrian in Fatal Crash While Walking on Union Avenue

Police reported that a woman was crossing on the outside of a crosswalk on Union Ave. near Truxtun Ave., when a car hit her. Ambulances arrived at the scene and transported the a local hospital for treatment of serious injuries. She was later pronounced dead.

It is confirmed that the driver remained at the scene and cooperated with officials.

Drugs, alcohol, or reckless driving do not seem to be contributing factors in this fatal pedestrian accident on Union Avenue. The authorities continue to investigate. If you witnessed the crash or have any additional information, contact the Bakersfield Police Department at (661) 327-7111.

The identity of the female victim has not yet been released.

Sincere sympathies to the friends and family of the victim.

If you or a loved one has been involved in a pedestrian accident, contact the experienced lawyers at Sweet Law Group. Our personal injury or wrongful death attorneys will guide you through this difficult time, and help you fight for justice and get the financial compensation you and your family deserves. For more information call (800) 203-3061 for a free consultation.