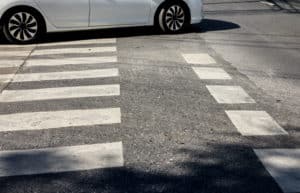 SPOKANE, WA (February 13, 2018) – A young boy was struck and injured by a car near Whitman Elementary School in the Nevada Lidgerwood neighborhood on Tuesday afternoon.

Avery Plank was walking home at the uncontrolled intersection of Columbia Avenue and Magnolia Street, when he was blindsided by a speeding vehicle. The car struck him and fled from the scene of the crash, leaving the injured boy in the middle of the road.

Plank was limping and in pain when he called his father, who rushed him to the emergency room. The teenager is currently recovering from injuries sustained in the accident.; damaged kidneys and torn ligaments.

Police officials are searching for the hit-and-run driver. No other information about the driver or the vehicle involved have been released at this time as authorities investigate.

When involved in a pedestrian accident, it is important to remain on the scene of the crash, contact authorities and emergency personnel, and make sure the victim is okay. Fleeing is not only illegal, but charges will be much more severe than if remaining at the site.

If you or your child have been injured in a hit-and-run pedestrian accident, contact the personal injury lawyers at Sweet Law Group. We promise to fight for you and achieve that compensation and justice that you deserve after the suffering that you have endured. Call us now at (800) 203-3061 for a free consultation, and speak to an experienced legal professional in your area.