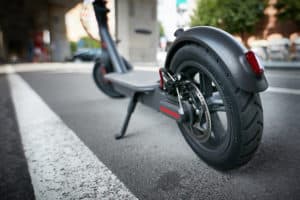 According to the Los Angeles Police Department, the fatal incident happened around 5:30 a.m. Surveillance footage captured the victim stopped at a red light at Vineland Avenue and Vanowen Street.

Anthony E. Chay, 20, had been facing forward when a high-speeding Audi convertible struck him from behind, sending him a few hundred feet ahead.

The suspect, identified as 24-year-old Jessica Martinez, subsequently struck several parked vehicles. One of the vehicles, a Toyota SUV, ended up onto its side due to the brute impact.

According to witnesses, the North Hollywood woman tried walking away from the scene, but Good Samaritans pursued and detained her before authorities placed her under arrest.

According to police, Martinez suffered minor injuries and was booked on suspicion of murder. However, Chay succumbed to his, leaving family and friends in mourning.

Authorities are investigating the details of this crash including impairment. It’s unclear at what speed Martinez had been traveling but due to the considerable damage, speeding is likely a factor.

We’d like to take this moment to express our thoughts and deepest sympathies to the friends and family of Anthony E. Chay.

If you have recently lost a loved one due to a reckless motorist, call the Sweet Lawyers at (800) 674 7852. We’ve undertaken a myriad of lawsuits involving personal injury, car accidents, wrongful death and disability law. We understand you’re experiencing a harrowing time, yet we assure you that with our unwavering commitment to helping you, you are in good hands.