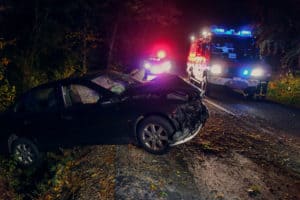 According to the California Highway Patrol, the accident happened near Blosser Road.

The Santa Maria Police Department said that officers first attempted to stop Mena’s vehicle that drove without headlights. 30-year-old Mena rammed into a police cruiser after he led them on a pursuit. He then crashed into the back of a vehicle that stopped at a red light at the intersection.

The driver of the other vehicle sustained injuries. As a result, paramedics transported to Marian Hospital for complaints of pain.

Mena has three prior convictions for DUI, driving with a suspended license that resulted from a DUI, and an outstanding felony warrant. As a result, police transported him to Santa Barbara County Jail. However, police have not released additional information at this time.

Driving under the influence of liquor and other prohibited substances is extremely dangerous. In addition, it can lead to road accidents resulting in injuries, damages, and deaths.

If you are injured in a DUI crash, contact the experienced auto accident lawyers at Sweet Lawyers. We have over 40 years of experience in the field. As a result, know what it takes to win your case and achieve the justice and compensation that you deserve. We have dealt with a variety of cases including personal injuries and auto accident cases. For a free case evaluation, call us day or night at (800) 674 7852. For your convenience, contact us 24 hours a day and 7 days a week. Above all, we believe you deserve the best legal representation and proper compensation for your pain and suffering