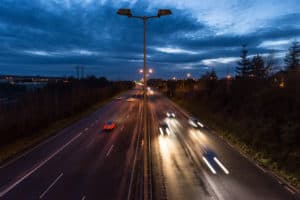 DUBLIN, CA (June 2, 2018) – A man was struck and killed while standing in Interstate 580 near Pleasanton, early Saturday morning. The victim was identified as 36-year-old Andrew Warhurst of Castro Valley.

According to the California Highway Patrol, Warhurst was a passenger in a black Chevrolet Aveo, driven by 21-year-old Shelby Sarin of Pleasanton. She had lost control of the vehicle while driving westbound on the 580 Freeway near the Santa Rita Road exit, around 12:15 AM.

The Aveo was in the far right lane and traveling at an undetermined speed when it veered all the way to the left and struck a concrete wall on the south shoulder of the freeway, before coming to rest in the fast lane. Sarin and Warhurst then got out of the car and stood in the traffic lanes outside of their disabled car.

While standing on the freeway, Warhurst was hit by a westbound Honda CRV, driven by a 34-year-old San Ramon man. The collision severely injured the Warhurst, and emergency personnel later pronounced him dead at the scene.

Sarin was arrested on suspicion of driving while under the influence of alcohol. She sustained injuries and was transported to the Eden Medical Center in Castro Valley for treatment. The unidentified Honda driver was not arrested, according to Hahn.

The crashes resulted in the closing down of westbound I-580 lanes for about four hours in the area during the investigation and cleanup. Authorities continue to investigate both accidents to determine who is responsible for Warhurst’s death.

Witnesses or anyone else with additional information about the fatal incident are urged to contact the CHP-Dublin Office by calling (925) 828-0466.

Heartfelt condolences to the family and friends of Andrew Warhurst. Wishing them strength and courage in this very trying time. May he rest in peace.

If your loved one was wrongfully killed in a DUI car collision cause by an irresponsible driver, reach out to the experienced lawyers of Sweet Law Group. With over 40 years of experience in the legal field, Sweet Law Group knows what it takes to win your wrongful death, personal injury, and disability. Call us at (800) 203-3061 to arrange your free consultation with an experienced legal professional in your area. For your convenience, we are also available through email, text message, and online chat.