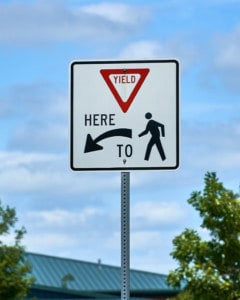 The accident happened at around 5:35 a.m. near the intersection of Magnolia Boulevard and Wilkinson Avenue.

According to the Los Angeles Police Department, the driver traveled east on Magnolia when he or she crashed into Bolotsky. The pedestrian was walking north on Wilkinson inside a marked crosswalk.

The motorist then fled from the scene without helping the pedestrian.

The Los Angeles Fire Department responded to the scene and transported the victim to a hospital, where he later died.

Bolotsky’s granddaughter told local a news source that he was a Holocaust survivor. He also had just celebrated his 91st birthday earlier this month.

Graphic surveillance video provided by Bolotsky’s family displayed a pickup slam into the elderly man in the crosswalk. The truck then pauses briefly before proceeding to drive over Bolotsky’s body as it drove away.

Another man who crossed the street simultaneously at Magnolia witnessed the entire thing. However, he failed to stop and help, the footage shows.

Officials described the involved vehicle as a white pickup truck. It has a white camper shell and a cargo carrier on the back.

We at Sweet Law Group offer our heartfelt condolences to the family and friends of Gennady Bolotsky.

If you have suddenly lost a loved one in an accident caused by a hit-and-run driver, reach out to Sweet Lawyers. We understand what you and your family are going through, and we are here to help you. Our team will fight until we achieve the justice and compensation that is owed. Call (800) 674 7852 today to set up a free consultation with a legal professional in your area. For your convenience, you also reach us through email, text message, and online chat 24 hours a day and 7 days a week.