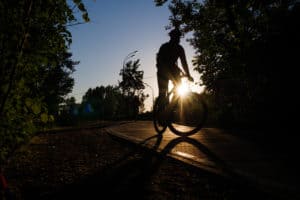 Officers with the Vallejo Police Department rushed at 1:20 a.m. to Fairgrounds Drive north of Gateway Drive on a call about a crash involving a vehicle and a bicycle. Arriving officers found an orange 2012 Toyota Prius that crashed with a bicyclist.

Emergency personnel rushed the bicyclist, a 66-year-old Vallejo resident, to a hospital. He died as a result of the injuries sustained in the incident. His identity was not immediately released Saturday morning.

According to the police, the car traveled north on Fairgrounds Drive. The bicyclist traveled west across the northbound lanes of the roadway when the crash happened.

The police said that the bicyclist wore dark clothing and rode a dark blue bicycle. The bicycle did not have lights and had a single reflector in the rear wheel.

A preliminary toxicology test showed that the bicyclist had alcohol and a variety of drugs in his system.

The driver of the vehicle was a 25-year-old man from American Canyon.

Our hearts break for the family and friends of the victim. We hope you find comfort and strength around you and our law offices send our sympathies.

The attorneys at the Sweet Lawyers are trained to undertake even the most seemingly and possible lawsuits. We pledge to remain in concert with your needs during this difficult time. Over the years, we have crafted and cultivated our positive reputation by delivering personalized attention and aggressive representation. With our 44 years of experience and excellent resources, we are sure to win your case. Attain compensation and justice, by calling (800) 674 7852 to hear from us.