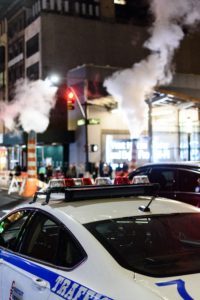 KEARNY MESA, CA (May 17, 2019) – Five people sustained serious injuries in a multi-vehicle crash on Kearny Villa Road on May 16.

The incident occurred just before 2:15 p.m. on Kearny Villa Road south of Balboa Avenue, near the northbound Highway 163 off-ramp. According to troopers, one of the two smaller cars drove into oncoming traffic and crashed head-on into the ambulance. However, the ambulance had no patient at the time of the collision.

Heims revealed that a 21-year-old male driver of a northbound 2008 Infiniti G35S on Kearny Villa Road drifted across the roadway. After that, it hit the southbound AMR ambulance. The collision led the ambulance to steer and crash with a Hyundai Azera, slightly behind and in a lane to the right of the ambulance.

As a result, two paramedics got stuck in front of the ambulance. The female driver of the ambulance and a male passenger, together with two young men in the Infiniti also got stuck, San Diego Fire-Rescue Battalion Chief Matt Nilsen said.

Meanwhile, Nilsen revealed that one of the paramedics blacked out during the collision. However, the paramedic immediately regained consciousness.

The ambulance driver suffered bleeding in her brain and a fractured right ankle. Fortunately, her injuries are not life-threatening.

The road was cluttered with debris from the accident. As a result, the authorities shut down Kearny Villa Road between Balboa Avenue and Aero Drive for more than four hours. Around 6:45 p.m., the road have since reopened.

Multi-car crashes can happen anytime, anywhere, and to anyone. For instance, one small driving mistake can lead to disastrous results. As a result, that is why it is important to drive defensively and always abide by all laws. Above all, remain aware at all times.

Reach out to the experienced lawyers at Sweet Lawyers. Especially if you’ve been involved in a serious accident like a multi-car crash. We have over 40 years of experience in the legal field. We know what it takes to win your case. Our attorneys and professional legal team have dealt with cases including car accidents, wrongful death, personal injury, and disability. As a result, we will fight to achieve the justice and compensation that you and your family deserve. Call our offices at (800) 674 7852 for a free consultation with a professional in your area. You can also reach us by email, online chat, and text message 24 hours a day and 7 days a week.