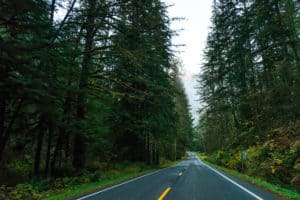 ASPEN, CO (June 26, 2018) – On Tuesday afternoon, four people were injured and sent to a hospital after a three-vehicle crash on Maroon Creek Bridge.

Authorities received a report about the wreck just before 1:00 PM, near Glen Dee Road. A Holy Cross Energy pickup truck with three people inside was driving downvalley. At the same time, a Jeep Grand Cherokee SUV headed upvalley was rear-ended by a Toyota 4Runner. Due to the impact of the initial crash, the Cherokee was pushed into oncoming traffic.

The Jeep then struck the Holy Cross truck almost head-on, front left to front left, and then crashed into a Jersey barrier on the bridge’s south side. A Snowmass police officer and ambulance personnel with the Snowmass-Wildcat Fire Protection District happened to be on the bridge at the time and were first to assist.

The driver of the Holy Cross truck and the two occupants of the Cherokee, a mother and daughter, were taken to the Aspen Valley Hospital. The Holy Cross driver’s medical status was not immediately known. Other victims were also injured but refused to be taken to the hospital.

The driver of the 4Runner admitted to police that he had looked away just before the collision. He transported himself to the Aspen Valley Hospital and was treated and released. Following his hospitalization, he was cited for careless driving causing injury. The identities of the involved parties were not released as of Tuesday afternoon.

The accident closed down the area of the collision and affected traffic in both directions for about 90 minutes after the incident.

Unfortunate road accidents can happen to anyone and anywhere. It is important to drive defensively and always abide to all driving laws to ensure your safety and the safety of surrounding vehicles, motorists, and pedestrians. Do not participate in distracting activities such as texting or eating, when behind the wheel.

If involved in car crash, contact the experienced personal injury lawyers at Sweet Law Group. We promise to fight for you, day and night, until we achieve the proper compensation and justice that you and your family deserve. Call our offices at (800) 203-3061 for a free consultation, and discuss your case with a legal professional in your area. We can also be contacted 24 hours a day/ 7 days a week by email, online chat, and text message.