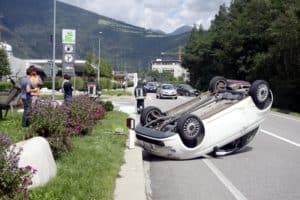 Witnesses reported three cars involved in a rollover crash just before 10:00 a.m. Dispatchers arrived to the area of S. McCarran Boulevard and Longley Lane shortly after.

Police later disclosed that the incident began when a speeding vehicle was driving northbound on Longley. There, the drive ran a red light before striking another vehicle and rolling over.

Medics arrived and described the victims’ injuries as minor. Northbound Longley lane was closed during the investigation, but has been since reopened. No further information has been released.

Car accidents are often caused by complex interactions and risky maneuvers of vehicles. If you find yourself unable to drive, you can always use a rideshare app instead. Moreover, failure to follow all the traffic laws could lead to serious consequences for yourself and for others.

If you or a loved one has been involved in a car crash or troubled by an injury, call us. Sweet lawyers have over 40 years of experience in the legal field. With our expertise, we know what it takes to win your case. Moreover, we are committed to doing our best to help you achieve the justice and compensation that you and your family deserve. Call our offices at (800) 674-7852 for a free consultation with a professional in your area. You can also reach us via email, live online chat, and text message 24 hours a day and 7 days a week.