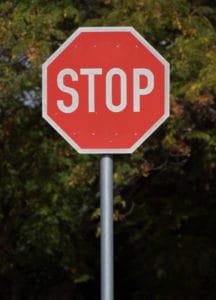 LAKEPORT, CA (March 8, 2019) – A DUI car accident involving a bus at Armstrong and South Estep streets Thursday resulted in the injuries of three people and the arrest of a teen.

According to the Lakeport Police Department, officers arrested a 17-year-old for DUI.

Around 7:43 a.m., the teen struck a People Services bus as the bus traveled eastbound on Armstrong Street. Heading southbound on South Estep Street before the impact, the teen blew through the intersection’s stop sign, which resulted in the crash.

Meanwhile, police officers arrested the juvenile after he displayed signs of impairment. Following a series of field sobriety tests, officers placed the teen under arrest and transported and booked him to Lake County Probation Department.

We hear it all the time – drinking and driving is a major factor in car accidents. If you’re impaired, never get behind the wheel. Instead of driving yourself home, rely on a trusted sober friend instead. Better outcomes stem from responsible decision-making such as never driving while drunk.

Committing our time and effort to each client, remaining focused and diligent and working aggressively to win is what we do at the Sweet Law Group. We are a personal injury law firm known for our success in wrongful death in personal injury matters. When seeking legal guidance, trust our seasoned lawyers. Losing a loved one is never easy, yet with our unwavering commitment and propensity to help others we will grant you the help you need. Call (800) 674 7852 to hear from us.