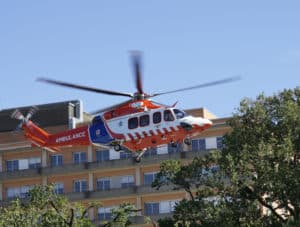 VICTORVILLE, CA (July 15, 2019) — A driver and a passenger suffered injuries in a suspected DUI crash on Encina Street Friday night.

Callers reported the single-vehicle rollover crash in the 16200 block of Encina Street near La Paz Drive in Victorville. Deputies and the Victorville City fire crew responded to the incident at about 8:48 p.m.

Officials said that a 2013 Honda Accord struck a silver 2013 Toyota Corolla parked along the west side of the roadway. As a result, the Honda rolled over and then landed on its roof.

Firefighters found two people in the roadway when they reached the scene. However, one of the patients sustained critical injuries. As a result, firefighters requested an air ambulance to land at Victor Valley Global Medical Center. After that, the air ambulance subsequently airlifted the male patient to Loma Linda University Medical Center for further treatment.

On the other hand, a second person sustained non-life-threatening injuries. An ambulance transported him to a hospital.

Residents in the area said they heard the crash and ran outside to check on the injured. One of them said they smelled a strong smell of alcohol coming from the driver and the passenger. There was also a liquor bottle near the car.

In the meantime, deputies are investigating the incident as a DUI crash causing bodily injury to another person.

If your safety was put under a great threat on the road due to a negligent or an irresponsible driver, contact the Sweet Lawyers. We have over 40 years of experience in the legal field. We will fight to achieve the justice and compensation that you and your family deserve. Our attorneys and experienced professional legal team have dealt with cases including car accidents and wrongful death. Call our offices today at (800) 674 7852 for a free consultation at a location nearest you. Or contact us 24/7 by email, online chat, and text message.