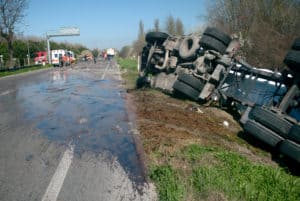 The incident occurred just after 1:00 p.m. on 580 Freeway south near Bellevue Road in Washoe County.

According to authorities, a sedan driver headed south through the valley. He then drove into the median and the oncoming lane. A truck driver attempted to swerve his vehicle to prevent a crash. However, the sedan already struck the truck’s back end and caused it to overturn.

The collision left the truck driver with a broken arm while the other driver didn’t suffer serious injuries. Responders transported them both to Renown Regional Medical Center.

Meanwhile, the left lane remained open while the right lane is closed.

Authorities believe that alcohol may have played a role in the collision.

Staying within the lanes of the road is an extremely important rule of the road. If you feel yourself drifting into other lanes due to fatigue or any other reason, safely pull over and rest before continuing to drive. You can also call a friend or an Uber to pick you up if you feel like it would be unsafe to drive.

Sweet Lawyers Group is your best bet when it comes to serious traffic accident. With over 40 years of experience in the legal field, we know what it takes to win your wrongful death, auto accident,personal injury, and disability case. We promise to fight, day and night, to achieve the justice and compensation that you and your family deserve. Call our offices at (800) 674 7852 for a free consultation with a professional in your area. We can also be contacted by email, online chat, and text message 24 hours a day and 7 days a week.