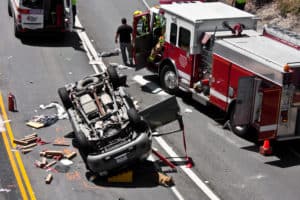 Two Crashes on 5 Freeway Result to Injuries and DUI Arrests

Involved in the collisions were four cars and one ambulance according to the California Highway Patrol. The first incident was a rear-end crash occurring at about 2:00 p.m. As a result, police report minor injuries and a DUI arrest.

While emergency response and the investigation were ongoing in that first crash, a white Nissan SUV slammed into the back of the ambulance. The force of the impact pushed the Nissan back into the lanes where it struck two passing vehicles.

The officers arrested the Nissan driver at the scene for DUI. The medics transported the driver to Mercy Medical Center with major injuries.

On the other hand, the drivers of the other vehicles and the paramedics from the ambulance did not sustain any injuries.

The Nissan had major front-end damage, while the ambulance sustained moderate damage to its right rear side.

The collisions are still under investigation.

Never drive under the influence of drugs and alcohol. This can impair thinking, reasoning, and muscle coordination which are essential in operating a vehicle safely. By being responsible, you will be ready to respond to the conditions of the road and the drivers around you in order to prevent accidents.

The Sweet Lawyers hold a wealth of knowledge in personal injury cases. If you’ve suffered a debilitating injury in a car accident, take legal action. We provide aggressive representation and compassionate guidance to our clients. In addition, we know that hiring an attorney may take time and research. However, when you choose us, Sweet Lawyers immediately start on your case while you rest and recover. To seek justice, a maximum settlement and prosecution against the reckless driver, contact us at (800) 674 7852.