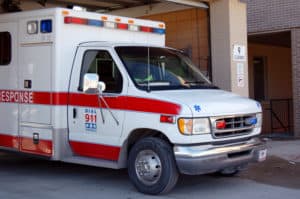 Oceanside Police Department reported the crash around 9:30 AM near the intersection of Rancho Del Oro and San Ramon Drive.

Officials stated that a box truck and a 2015 Ford Explorer were involved in a collision. One of the drivers was traveling southbound on Rancho Del Oro near San Ramon Drive when it lost control. As a result, it hit the other car driving north. However, it is still unknown as to why the vehicle lost control or which vehicle it was

First responders arrived immediately. The Ford driver sustained life threatening injuries while the other was critically injured. Both were transported to a nearby hospital for further medical evaluation. However, there has been no update on their medical status.

Due to the collision, traffic was shut down between Craven Road and San Ramon Drive for a period of time. No more details surrounding the accident have been released at this time.

If you notice a vehicle driving erratically, keep you and your vehicle at a safe distance. Box trucks tend to have larger blind spots and less visibility than smaller cars. In addition, take extra precautions when you are driving on the road for traffic and other motorist. Doing so can prevent any dangerous accidents from happening.

If you, or someone you know have been involved or injured in an accident, call the attorneys at Sweet Law Group (800) 674-7852. With over 40 years or experience in the legal field, we have a team and the resources to win your personal injury case. Let us help you achieve the justice and compensation that you deserve. Contact us today for a free over the phone consultation to answer any questions or concerns you may have at a location near you. We can also be contacted by email, online chat, and text message 24 hours a day/ 7 days a week.