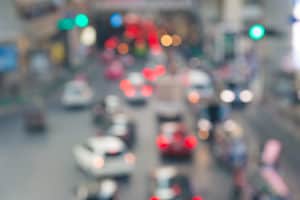 Preliminary investigation shows that both vehicles were traveling south on Aurora, when one of the drivers swerved into a dark grey sedan. Due to the impact of the collision, the car that was hit drove off the road and crashed into a building near Berth’s Cafe.

Surveillance video from a nearby business shows a man falling out of his vehicle, and people running over to help him. The impact was so forceful, that the engine flew out of the sedan.

State troopers and medics arrived at the scene around 5:30 AM, after receiving several calls about a serious accident. The victim that was ejected from his car was pronounced dead on site by first responders. The driver of the other car, a 27-year-old man, was transported to the hospital. He was arrested for vehicular homicide and possible DUI.

No further information has been released to the public as the investigation continues.

Our thoughts and prayers go out to the family and friends of the deceased victim during this tragic. May he rest in peace.

If you have lost a loved one in a DUI accident, contact the wrongful death lawyers at Sweet Law Group. Our firm has over 40 years of experience in the field, and we do all it takes to win your case and achieve the justice and compensation that you deserve. Call us at (800) 203-3061 to arrange a free initial meeting with one of our experienced legal professionals in your area. We are available to clients 24 hours a day/ 7 days a week by email, text message, phone, and online chat for your convenience.