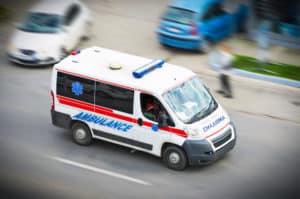 One Dead after Multi-Vehicle Collision at San Francisco International Airport

SAN FRANCISCO (July 3, 2019) – One person died and two were hurt after a multi-vehicle crash at the San Francisco International Airport.

The crash happened on the arrivals section of the lower level into the international terminal at around 3:30 p.m., on Monday.

Paramedics rushed all three victims to a local hospital with life-threatening injuries. However, one of the male victims succumbed to his injuries and was later pronounced dead around 4:28 p.m.

Reports identified the driver of the Ford as a 46-year-old male. However his name has not been released. He allegedly accelerated his speed prior to spinning out and striking the pedestrians.

The driver of the Ford remained on scene and cooperated with officials. He did not show any signs of impairment, and the incident did not appear to be intentional.

Officers diverted traffic to the upper level until they cleared the scene. However, the area has since reopened.

Our condolences remain with the loved ones of the victims during this difficult time. We hope they are brought peace and comfort while grieving their loss.

Unexpectedly losing a loved one is a challenging process to go through. When involved in a multi-vehicle crash, reach out to the experienced attorneys of Sweet Lawyers. With over 40 years of experience in the legal field, we know what it takes to win your wrongful death, personal injury, and disability case. Call us today at (800) 674 7852, and arrange a free case evaluation. For your convenience, we are also available 24/7 through email, text message, and online chat.